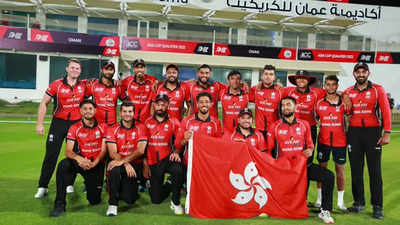 MUSCAT: Hong Kong qualified for the Asia Cup on Wednesday, where they will face India and Pakistan, after defeating the United Arab Emirates by eight wickets in the final qualifying round.

Chasing 148 to win, Hong Kong reached their target with an over to spare with Yasim Murtaza top scoring on 58.
The 31-year-old Murtaza made his runs off 43 balls and hit seven boundaries and one six.

But it was 37-year-old spinner Ehsan Khan who was named man of the match for his 4-24 in his four overs as the brakes were applied to the UAE innings.

He removed both of the Gulf team's top scorers, skipper Chundangapoyil Rizwan (49), who was smartly stumped by Manchester-born wicketkeeper Scott McKechnie, and Zawar Farid (41).

The Asia Cup gets underway on Saturday with India, Pakistan and Hong Kong drawn in Group A and Afghanistan, Bangladesh and Sri Lanka in Group B.