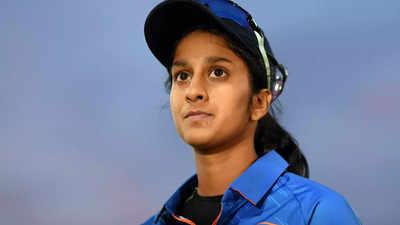 Jemimah Rodrigues out of The Hundred with wrist injury, Gaby Lewis replaces her

BIRMINGHAM: India batter Jemimah Rodrigues' stint at the ongoing 'The Hundred' lasted just two matches after she was ruled out of the remainder of the tournament due to a wrist injury.
Rodrigues was a part of the Northern Superchargers side.
"Northern Superchargers batter Jemimah Rodrigues has unfortunately been forced to end her season in The Hundred due to injury," the tournament's official website said.

Rodrigues, who was part of India's silver medal-winning side at the Birmingham Commonwealth Games, had earlier injured her wrist during a league stage match against Barbados at the quadrennial event. She finished as the fifth highest scorer in the CWG with 146 runs.

The extent of the injury is not known yet. The Indian team would hope Rodrigues recovers in time for the away series against England next month.
India and England are scheduled to play a white-ball series comprising three T20Is and as many ODIs, starting September 10.

In The Hundred, the 21-year-old Rodrigues smashed 51 off 32 balls in Superchargers' opener against Oval Invincibles in a losing cause before making two in the next match against London Spirit.

The Indian batter has been replaced by Ireland's Gaby Lewis.

Superchargers campaign began with a nine-wicket defeat to the Invincibles last week but they bounced back in their second game, beating London Spirit by five runs in Leeds. She was the top scorer for the Superchargers last year.