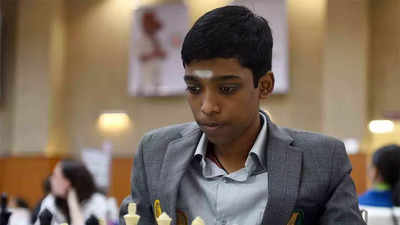 FTX Crypto Cup: Praggnanandhaa beats Carlsen in final round but loses out on top prize

MIAMI: Young Indian Grandmaster R Praggnanandhaa produced a superb performance, winning three straight games including two in the blitz tie-breaks to outwit world No.1 Magnus Carlsen 4-2 in the final round of the FTX Crypto Cup here on Monday.

However, despite the win over Carlsen, the 17-year old could only take second place in the final standings.
The Norwegian won the top prize on the basis of a higher score. He finished with 16 match points to the Indian prodigy's tally of 15.

"I've been playing badly all day, but now I'm getting the results I deserve... it's never good to lose, but this is as good a time as any!," Carlsen said after the match.
Alireza Firouzja, another highly-rated teen and a prodigy, also finished on 15 points but had to settle for third place as he had lost the clash against Praggnanandhaa earlier.

The first two games of the Carlsen-Praggnanandhaa match were drawn before the world No.1 went ahead by clinching the third.

In a surprise turn of events, the Indian won the fourth game to push the match into the tie-breaks. He shocked the Norwegian by winning both the games in the tie-break.
Praggnanandhaa has been in splendid form this year and had previously beaten the world champion twice in online events.

He also played a crucial role in the India 'B' team claiming a bronze medal in the 44th chess Olympiad in Chennai recently.

"I think it could have done better the last few days but I think overall 2nd is good," Praggnanandhaa said after the game against Carlsen.

Praggnanandhaa started his campaign with victory over world No.4 Firouzja and also scored wins over Anish Giri and Levon Aronian.

The eight-player all-play-all tournament was the American finale of the Champions Chess Tour. Each match was played over four rapid games, with blitz tiebreaks in case of a 2-2 draw. 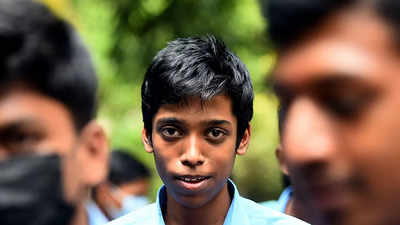 MIAMI: Indian Grandmaster R Praggnanandhaa's winning run came to an end at the hands of China's Quang Liem Le in the fifth round of the FTX Crypto Cup, the American finale of Champions Chess Tour, here.

Liem Le scored an emphatic 2.5-0.5 win over the teenaged Indian GM, securing victories in games two and three after the opener ended in a draw.
A 43-move win in the third game sealed the deal for Liem Le as Praggnanandhaa's stupendous run was halted.

World No.1 Magnus Carlsen, meanwhile, went down 2-4 in a tie-break to Jan-Krzystof Duda of Poland after the four-game match ended 2-2.
The Norwegian is in sole lead after the fifth round with 13 match points, one ahead of Praggnanandhaa.
The 17-year old Indian prodigy has been in superb form in the tournament, scoring wins over world No.4 Alireza Firouzja, Anish Giri, Levon Aronian and Hans Niemann before the Chinese GM halted the streak.

Praggnanandhaa's coach Ramesh said after the player's first defeat, "Tough loss for @rpragchess against Liem losing with a score of 0.5 - 2.5. Over extended in second game and paid the price. Well done Liem!"

In other matches in the round, Firouzja beat the winless Niemann 2.5-0.5 to close in on Carlsen and Praggnanandhaa with 11 match points.

The eight-player all-play-all tournament is the American finale of Champions Chess Tour. There is USD $7,500 at stake for each match win at the event.

Each match will be played over four rapid games, with blitz tiebreaks in case of a 2-2 draw. Olympic-style torch relay to be introduced ahead of 44th Chess Olympiad, every relay to start from India.

50 days to go for Chennai Olympiad. Do watch, cheer and join me at the Olympiad Torch Relay . ⁦@aicfchess⁩ ⁦@FIDE_chess⁩